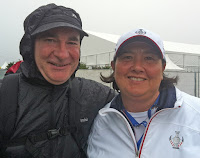 Jonny was lucky enough to go to the Solheim Cup in St Leon Rot in Germany in September.

The event, for those of you not in the know, is known as the "Ladies Ryder Cup".  Three days of superb golf played between the USA and Europe.

This year the USA won against remarkable odds, with a superb showing in the final days singles matches, overcoming a 3 point deficit.

Unlike the Ryder Cup, it is possible to get quite close to all the players, and I had the fortune to meet and speak to US golf legend Patty Hurst winner of 6 LPGA events and also a major in 1995.

Karsten Solhiem the founder and owner of Ping started the "Solhiem Cup" in 1990. As a manufacturer and main sponsor Ping also supply clubs to some of the World's greatest golfers, including the UK's Lee Westwood and 2012 Masters winner, Bubba Watson.

In fact some of Bubba's clubs were on display and I was given the chance to hold them. This was the wedge that drew a ball some 35 yards in the air and put the ball inside 10' and the putter he used for his first major win...

Take a look at the video of the shot physics - quite amazing...163 yards with a gap wedge is almost unreal, but to also shape the shot, under that presssure...well its something we can dream of!