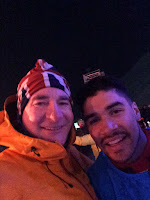 What a fun night, to be invited to watch Channel 4's "The Jump" and to see the final live!

Described as the most dangerous show on TV, the Jump is filmed (mostly) live in Kuhtai deep in the Austrian Tyrol. Many participants have become injured attempting to overcome various ski related disciplines.

On the night, the crowd's favorite Lewis Smith only managed second place - but he had been the he bookies choice. He was beaten marginally by Spencer Matthews (apparently a 'socialite')? 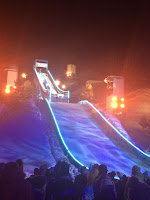 Davina McCall did a good job reading the auto cue - she is a true pro...

If you want to know more about the Jump click here