Uncle Col - Your Spirit Lives On... 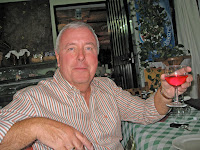 Some of you will have met Colin Fellows.

I first met him in 1987 when he was working at a company in Leicester called QED Marketing. I recall being asked around to his house in Castle Donington to discuss a project for Newey Goodman when I was freelancing. I remember being impressed that he had such a lovely house and family with his kids Nick and Ben who spent a lot of time charging loudly around the lounge whilst Bettie tried to keep them calm, and us both fortified with tea and biscuits...

He must have like what I did because I worked on several projects with him after that and within the year was invited to work in-house at QED for a day a week for few months.

This was at the time when designers first started using Apple Macs and QED had just purchased a suite of Mac II CX machines. I'd already been using a Mac for over a year and was pretty adept at using the applications (mainly Quark Xpress, Aldus Freehand and Suitcase etc). I was able to help him out on a wide range of work, alongside QED's in-house designer, Ian Rawlings who I had also worked with at Evets PR previously.

My business began to grow and I was kind of 'forced' to move out of the Radius (a beautiful purpose built semi circular extension to my house) due to large delivery lorries visiting the house (in fact it was a neighbour who reported me)  The result was that in 1991 we moved to our present address at Trinity House on Green Lane in Derby. Meanwhile Colin had been having some issues at QED and decided to 'go it alone'. Having discussed with him the idea, he moved into our offices in mid 1991 and set up Fellows Associates which proved to be a very successful and rewarding move for us both.

We enjoyed a really good working relationship working for clients such as Chilprufe, Newey Goodman, JMc, Systech International, Leicester County Cricket Club, Transmitton and many others, right up until his retirement in 2006, when he moved to his dream home in Calahonda in Spain. He and his wife Bettie spent time between the UK, Australia and Spain visiting sons Nick and Ben and their families.

Sadly, on May 2nd 2017 Colin passed away, having fought a long battle with cancer. He was able to enjoy his friends and family right up until the end and rarely spent too long in any hospitals so in that respect, he had, as some say 'the best given the circumstances'.

Colin was always very sociable and easy to get on with and very much a 'hands on' character. He will be fondly remembered by myself and I am sure, anyone that had the pleasure to know or work with him.

Colin - your spirit lives on...