Next week eight interpid golfers embark on the second Wider Cup to be held in Marbella, Spain. This event was renamed the Nick Slade Wider Cup in memory of Nick who sadly untimely passed away earlier this year. 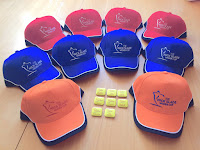 Nick was a giant of a man who lived life to the full. A larger than life character with a left handed golf swing who made friends with eveyone he met. He will be missed and I am sure that more than a few toasts will be made in his name next week.

The Nick Slade Wider Cup deserved a branding befitting of his charisma, so I designed this logo (based on his lefty swing and customary reveresed baseball hat). The logo has been produced on  all sorts of apparel from shirts and hats to pin badges as well as score sheets and rules etc.

If you have an event you'd like to brand, then why not give the team a call on 01332 291141 and we will be delighted to discuss your requirements
Posted by parky