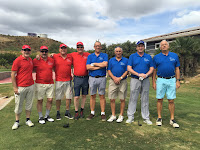 This golfing event is now held every year in remembrance of Nick Slade who died suddenly from cancer in early 2018. He was a Red Team member at the inaugural “Wider Cup” event in 2017.

The teams comprise four players each and the competition is played over four rounds, in matchplay format. This year the Red’s successfully defended their title, with a score that was actually closer than it appeared.

The individual completion was won by Andy Bourne - who receives the cup at a presentation lunch in December. Once again for the third time in a row, Jonny came second! (some would say that is,
at the very least, consistent).